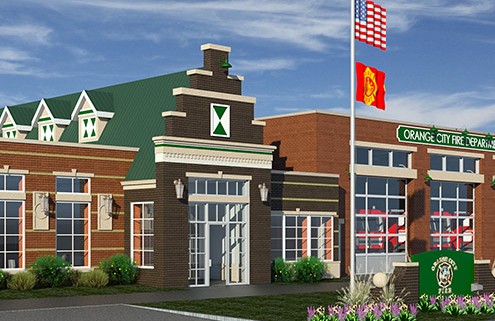 Sealed bids for the work comprising the above described improvements must be filed before 2:00 o’clock P.M. on the 28th day of July 2016 at Orange City Hall Council Chambers, 125 Central Ave. SE, Orange City, Iowa, , and at such time and place will be opened and publicly read. Bids received after the deadline for submission of bids as stated herein shall not be considered and shall be returned to the late bidder unopened.

Bids will be considered by the City Council for the city of Orange City at its meeting at 4:30 P.M. on the 1st day of August, 2016 in said City Council Chambers. The City Council may award a Contract at said meeting, or at such other time and place as shall then be announced.
Contract documents may be examined at the office of the Architect, Cannon Moss Brygger Architects, 302 Jones Street, Suite 200, Sioux City, Iowa 51102-3689, or obtained from the Architect for a $200 refundable deposit. This deposit is refundable, provided the following conditions are met: (1) The Contract Documents are returned complete and in a reusable condition, and (2) they are returned within fourteen (14) calendar days after the award of the project. Contract documents may also be examined at the following building Exchanges.

Work under the proposed contract shall be commenced upon receipt of signed contract and shall be completed in a timely manner but in no event shall Substantial Completion of the Orange City Fire Station be later than October 1, 2017, subject to any extension of time which may be granted by the City Council.

The City of Orange City reserves the right to defer acceptance of any bid for a period of thirty (30) calendar days after receipt of bids and no bid may be withdrawn during this period.

By virtue of statutory authority, a preference will be given to products and provisions grown and locally produced with the State of Iowa.

Each successful Bidder will be required to furnish a corporate Surety Bond in an amount equal to one hundred percent (100%) of its Contract price. Said Bond shall be issued by a responsible Surety approved by the City of Orange City and shall guarantee the faithful performance of the Contract and the terms and conditions therein contained and shall guarantee the prompt payment of all material and labor, and protect and save harmless the City of Orange City from claims and damages of any kind caused by the operations of the Contract.

The City of Orange City does hereby reserve the right to reject any or all bids, to waive informalities, and to enter into such contract, or contracts, as it shall deem to be in the best interest of the City.