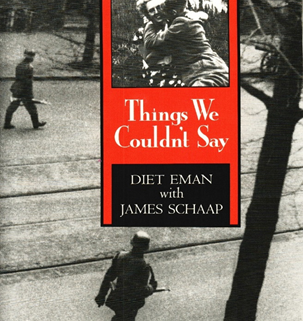 “Things We Couldn’t Say” – A Reader’s Theater telling the true story of Diet Eman, a young woman in the Dutch Resistance who risked her life to save innocent people.
September 11, 7:30 pm at Unity Knight Center. $5 at the door.

Diet Eman was just 20 years old when the Nazis invaded the Netherlands. She and her fiance, Hein Sietsma, began working in the Dutch Resistance, first with small acts of sabotage and undermining the Germans and eventually moving into the dangerous work of finding places to hide Jews and feed them, move them when needed, find medical care for them, and so on. Diet, Hein and others risked their lives for the sake of others.

Diet’s fiance Hein was killed doing Resistance work, and after the war Diet eventually emigrated to the United State to Grand Rapids, MI. She kept a diary but had not spoken publicly about her role in the Resistance. Eventually she was encouraged and convinced to do so and our own Alton resident Dr. Jim Schaap approached her about writing her story.

Interviews with Diet and the use of her diary resulted in the book: “Things We Couldn’t Say”.