Witness of Combines- One Book One Sioux County 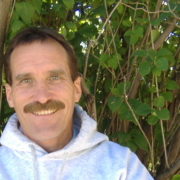 Join 8 public libraries and 3 academic libraries in Sioux County as we listen to Kent Meyer, author of The Witness of Combines, as part of the 3rd annual One Book One Sioux County. Meyers will speak on November 8 at 7:00 pm in Building A of NCC in Sheldon.

Kent Meyers is the author of a memoir, a book of short fiction, and three novels, most recently Twisted Tree, which won a Society of Midland Authors award and a High Plains Book award, and was translated into French. The River Warren and Light in the Crossing were New York Times Notable Books, and The Work of Wolves won the Mountain and Plains Booksellers Association Award and an American Library Association Award. Meyers has published fiction and essays in numerous literary journals and magazines, including an essay in Harper’s Magazine on the search for dark matter. He lives in Spearfish, South Dakota and teaches in Pacific Lutheran University’s low-residency MFA program, the Rainier Writing Workshop. 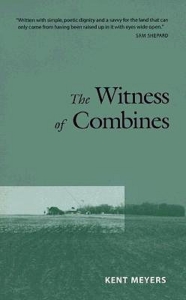 This year’s One Book, One Sioux County selection is The Witness of Combines by Kent Meyers.

When Kent Meyers’s father died of a stroke, there was corn to plant, cattle to feed, and a farm to maintain. Here, in a fresh and vibrant voice, Meyers recounts the wake of his father’s death when he was sixteen and reflects on families, farms, and rural life in the Midwest.

Meyers tells the story of his life on the farm, from the joys of playing in the hayloft as a boy to the steady pattern of chores. He describes the power of winter prairie winds, the excitement of building a fort in the woods, and the self-respect that comes from canning 120 quarts of tomatoes grown on your own land.

Meyers’s father is the central figure that these memories revolve around. After his father’s death, Meyers fills his shoes out of necessity, practicality, and respect. In doing so, he discovers that his father was a great teacher and that he is no longer a boy but a man. Perhaps the most moving passages in The Witness of Combines are filled with the simultaneous sadness and pride of growing up in response to death. Meyers recalls planting and harvesting the last crop, selling the family farm, and other stirring moments in a testament to his father, the family bond, and the value of hard work.  -description from Amazon.com