This 76 foot tall landmark that doubles as a tourist attraction and a Visitors’ Center/Chamber of Commerce. This eye-catching but non-functional windmill has a dome that weighs 5 tons and vanes that weigh over 7 tons. It was built in 1973 as a drive-up teller window for the Northwestern State Bank to fit in with the community’s ethnic theme, and in 2000 it became the headquarters for the Chamber. Information available inside includes brochures on Orange City’s annual May Tulip Festival, maps, and brochures on attractions around the state and surrounding area. 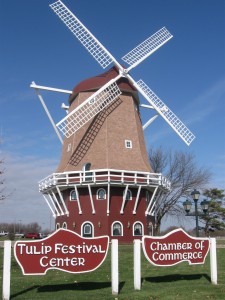