This unusual instrument was built by Charles Marenghi & Cie. of Paris, France. It was originally constructed as a dance organ of 79 keys. According to research by Fred Dahlinger, the instrument’s keyframe number, 2373, indicates the organ was built around the 1909-1910 period. Unfortunately, no photographs of the original dance instrument have yet come to light and little of its history is known.

Dance organs eventually fell out of fashion, and the instrument was converted to a street organ by the firm of Jacques Minning of Rotterdam (Netherlands), who reduced in size to its present 67 key configuration. The year of its conversion is as yet unknown. An early photograph of the instrument, perhaps taken in the years prior to World War Two, depicts the organ on a horse drawn cart in its much modified and smaller form. Note the absence of the three animated figures that, in later years, grace the front of the organ’s case. What is known, however, is that the street organ had been shipped to Philadelphia in 1950 to furnish entertainment at the Netherlands Trade Fair. It is presumed that the three animated figures were introduced to the organ sometime before it made its way overseas.

After the Fair, transportation costs precluded the instrument’s shipment back to the Netherlands, so Fair officials decided to dispose of it. Harry Van Pelt, a professional actor from the Netherlands, who with his wife had just completed a three-day stand at the Orange City Tulip Festival, learned of the organ’s availability and made a call the Orange City Chamber of Commerce. Within two hours of that phone call, the transaction to purchase the instrument had been completed and a check was on its way to Philadelphia. At the time, this was only the second known Dutch street organ in the United States, and the only one in playing condition. 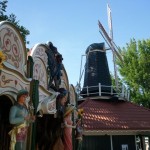