The county seat was officially moved to Orange City with an election held in November 1872. The construction of a red and buff- colored sandstone building began in June 1902. Construction was stalled when the construction company went bankrupt later that year.

The building was finally completed in October 1904. There was a huge celebration containing bands, glee clubs, speeches and even fireworks. M.P. Van Oosterhout of Orange City furnished two 1,400 pound steers for the barbecue.

Lightning struck the courthouse tower in 1907, knocking off about four feet of the pinnacle, which broke many roof tiles. A 10-foot bronze statue of “Lady Justice” (Vrouwe Justitia), replaced the broken pinnacle.

From 1976-1982 extensive improvements were made to the courthouse and its facilities: a new roof, renovated courtroom, an elevator, the latest computer system, and new voting machines. In 1977, the Sioux County Courthouse was placed on the National Register of Historic Places 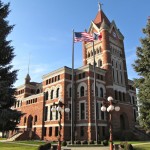