The central information center identifies events in Orange City. It also contains a detailed map showing locations of local businesses. Brochures may be found in the box below the posters.

This is the oldest type of molen used as early as 1200 to grind corn.

Developed during the 15th century, this is the oldest drainage molen. It evolved from the Standard Molen and was used to drain the polders.

Developed around 1600, these were used to saw timber. Logs arriving on flats had to remain in water for a long time before they were sawn, thus this molen was always located along a waterfront.

Looking ahead beyond a patio, you will see a farmer’s market. It is built in the style of Zaanse Schaans with dark green paint and decorative shutters. A “Booster Rooster” stands proudly on top of the cupola which is modeled after one on the Spaander Hotel in Volendam, North Holland.

Continuing around on the sidewalk, you will see on your right a small molen called “Tjasker.” These molens were used to keep pasture lands dry and have fallen entirely into disuse. These do not resemble the typical Dutch Molen in any way.

Developed in North Holland during the 16th century to drain polders, these molens were built in gangs of five, each one lifting the water three feet.

About 1604, Dutch millwrights started to build large and tall molens to grind corn; these were able to catch the wind across other buildings and did not have to be erected on the outskirts of the towns. Used as a corn mill for industrial purposes during the 17th century.

As you walk across the bridge which spans the canal, note the fares one would pay to cross the bridge. This is a replica of the baluster lifting bridge found in Ouderkerk, Friesland. The mechanism which would open the bridge to canal traffic was a counterbalanced beam so that it could be opened by one person.

Centered in Windmill Park is a replica of the town pump in Middleburg, Zeeland. This was not only a water source for people, but the place to share the news by the citizens.

This was designed with towers, copper turrets, and colorful shutters similar to the castles in Gelderland.

This was recently re-done to accommodate a play area in the downtown business area.

The beds contain thousands of bulbs imported from the Netherlands which bloom each May for the Tulip Festival. Also, each province in the Netherlands is represented with a flag. Annuals are planted to beautify the park during the summer.

Built in 1955, the Windmill Information Booth is used during Tulip Festival and other community events. 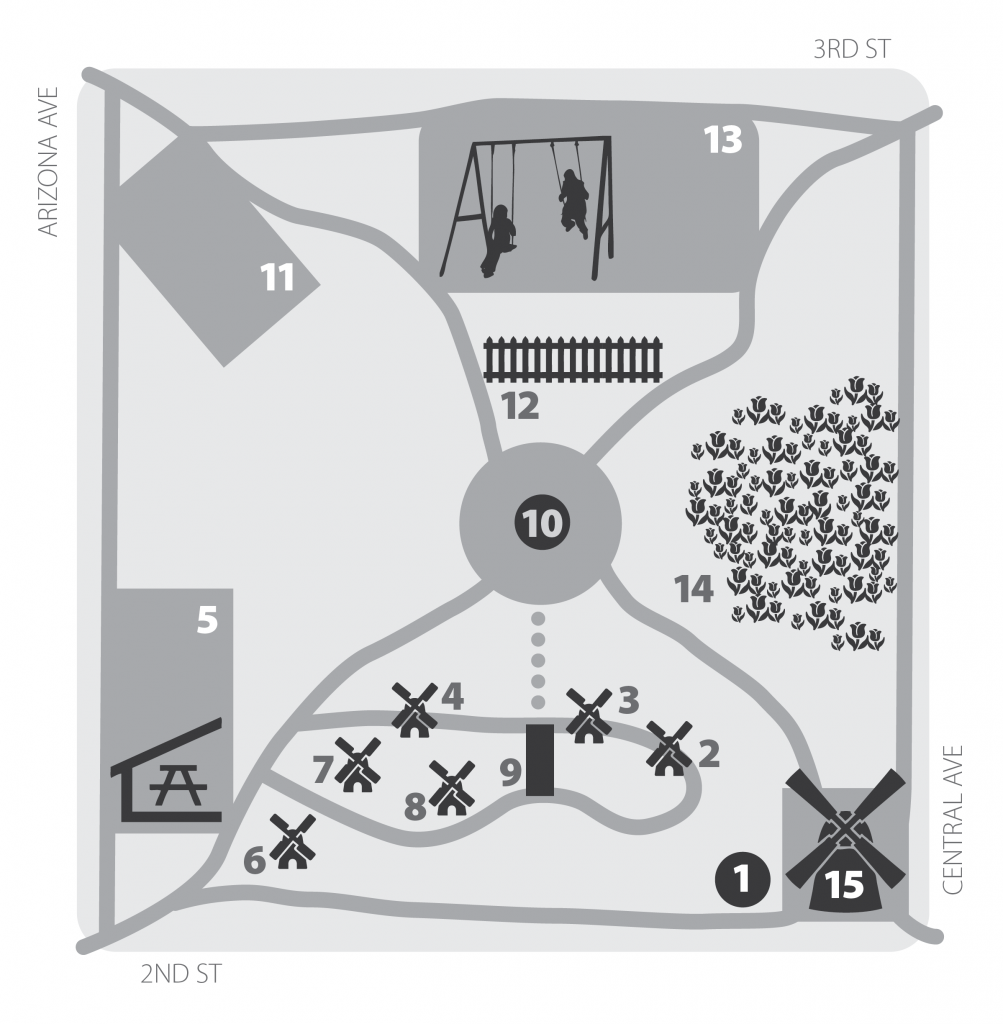 Scroll to top
Change Location
Find awesome listings near you!