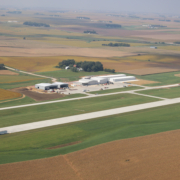 SIOUX COUNTY – A new regional airport that will broaden the transportation future of the region will have its grand opening and ribbon cutting on Wednesday, Nov. 14.

All are invited to the ceremony at the Sioux County Regional Airport, a nearly $32 million joint project by Orange City, Sioux Center and Sioux County.

The regional airport is also home to six private hangars and additional leased hangar spaces. Thirty-five airplanes are expected to be housed at the site.

“Partnerships formed over a period of nearly 20 years have allowed us to do a first-class aviation project to serve industry, business, medical, agricultural, charter, private air service, and other travel interests,” said Sioux County Regional Airport Agency Board Chairman Harold Schiebout. “The strong partnership between two communities and the county is the backbone of this project, along with the great partnership we have with the FAA and Iowa DOT.”

Prior to this project, the airports in the county had constraints that limited usage and aircraft size.

“The economic impact will be significant, allowing existing industries and businesses to grow and provide employment by expanding their national reach,” Schiebout said.

Schiebout noted that private fundraising for the project was also very successful, drawing more than $750,000 for safety features and airport enhancements.

“This grand opening will be a great opportunity for the public to view the regional airport and the positive impact those partnerships have had in developing this project,” he said.