Area artists are invited to submit art for a fifth juried exhibition, The Artist’s Showcase: Orange City Arts’ Regional Exhibition. Deadline for submissions is March 18. The exhibit will be April 22-30, 2016 at the Northwestern College DeWitt Theatre Arts Center.

The exhibit is open to artists from Iowa or within a 350-mile radius of Orange City. Any adult, college or high school-age artist may submit up to three works of 2-D or 3-D art, created in the past three years. There is no theme, no entry fee. Work must be submitted digitally to Orange City Arts.

The exhibit will be held in conjunction with the Northwestern College production of Rabbit Hole.

Best of show and honorable mention awards will be given, with $100 and $40 cash prizes. Artists accepted for exhibit will receive complimentary tickets to the theatre production.

Read more and get entry information below.

In a daylong event culminating in a Queen’s pageant, McKenzie Mulder was crowned the 2013 Tulip Queen.  McKenzie, the daughter of Scott and Jill Mulder, is a senior at MOC-FV High School.  She will preside over the 2013 Tulip Festival to be held the third weekend in May.
Serving with McKenzie as members of the royal court are Larkin De Haan, daughter of Derrick and Pam De Haan, Jessica Giannantonio, daughter of Patrick and Susan Giannantonio, Autumn Pluim, daughter of Dale and Jill Pluim, and Samantha Wielenga, daughter of Brad and Julie Wielenga.
Judges for the event were Alecia (Kuiken) Gunderson, 2004 Tulip Queen, Connie Wagner, co-founder and writer for N’West IA Review and Kurt Van Noord, Equipping Pastor at Maurice Reformed Church. 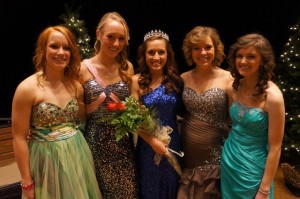 Looking to get out of the house with your child or Daycare? Come to the City Hall and burn off some of that energy!

At this time no toys with wheels are allowed.

For more information contact Mitch Aalbers, Parks and Recreation Director, at 707-4885 or prdir@orangecityiowa.com

Looking to get out and get some exercise and share in some social time with others?

Men and women are welcome to participate in our open gym basketball at the City Hall.